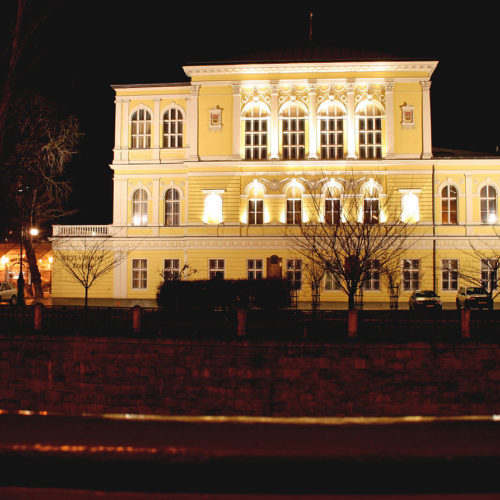 The neorenaissance Žofín Palace, one of the most notable architectural treasures, can be yours! Žofín Palace is used for important social events, conferences, concerts and balls. The Large Hall at Žofín regularly hosts the most prominent personalities from business, politics and the arts in this country and abroad. Agentura NKL Žofín, s.r.o. can organise everything for you to the highest professional standards. Today anyone who wants to hold an important event at the very highest level chooses Žofín Palace.

In 1835, when Václav Novotný decided to build the first brick building on Slavonic Island (or Dyers’ Island as it was then called), he had no idea that the one-storey neoclassical building named after the mother of Emperor Franz Joseph I, Princess Sophie (or Žofie in Czech), would become one of the most important cultural and social centres in Prague and the Czech Lands as a whole. In 1884 the municipality bought the whole island, including Žofín, and over the next two years it converted the building into the present neorenaissance palace with richly decorated interiors and fine halls that have now been part of Czech (and not only Czech) culture for the last 150 years. On 5 November 1882 the first performance of Smetana’s My Country in its entirety took place at Žofín, and four years previously, on 17 November 1878, Antonín Dvořák had held his first concert here. The hall at Žofín also hosted performances of Zdeněk Fibich’s works; Berlioz, Liszt, Tchaikovsky and Wagner all appeared here, and Jan Kubelík made his debut here. Žofín was also a venue for balls and dances. The first was held on 3 February 1841 and two years later the writer Božena Němcová danced here, and Žofín was visited by the poet Jan Neruda and other figures from Czech history. Since 1994, when the renovation of the palace’s exteriors and interiors was completed, Žofín has been managed by Agentura NKL Žofín, s.r.o. The company has restored and added to the glory of this exceptional venue where concerts of classical and popular music alternate with the Žofín Forums, international conferences and wonderful balls. Its location, in a venerable park with a view over Prague’s historical panorama, and the magnificent and gloriously decorated halls with original paintings and stuccowork on the ceilings, fitted with modern lighting, sound and projection technology and air conditioning, once more offer unique opportunities and experiences.